As told to Lela Nargi

“I grew up in a town called Issaquah, WA, 20 miles east of Seattle. Then I went to Arizona State University for my undergraduate degrees in vocal performance and musical theater before moving to New York five years ago.

Now I am a coloratura soprano, which is a classification of soprano that sings a high and fast repertoire. It’s a little bit challenging because you’re expected to be perfect at all times, so it requires a tremendous amount of dedication and practice and time spent learning and working on your craft. But I love it, and it allows me to play a lot of fun roles.

I just sang my first Gilda in Rigoletto by Verdi this summer. She’s more of a lyric soprano but she has some coloratura elements to her, and that stretched me out as a singer and gave me a whole new bag of tricks to pull from. I’ll be doing my fourth Gretel this January with the Knoxville Opera’s outreach program. I get hired more often than not to play very young girls, because I don’t look super old and I’m on the small side. I love playing children. It helps me relate to the children I babysit for, and they love when I show them pictures of myself in costume as a little girl. They think that’s the coolest thing they’ve ever seen.

Upon request, I’ve shown a couple of my kids YouTube videos of me singing. One little girl I babysit for regularly was obsessed with a recording I have of West Side Story and insisted that we sing together. Her mother asked me recently if I teach voice, and that would be the ultimate reward for me—to take a child I’ve babysat for and introduce her to the world I live in most of the time.

Mostly, though, kids have a lot of questions about opera singing. The number one question hands-down is: Can you break a glass with your voice? It’s actually very difficult to do that; you have to sing a really high note very loudly. I can’t do it yet, but maybe someday! Then they ask me how I make so much sound come out of my mouth. They ask me a lot of questions about costumes, and they want to know everything about opera, which is great. I like to think I’m building the next generation of opera lovers.

My first teacher, Phyllis Peterson, was 80 years old when I met her. She had fire engine red hair, and she was about 5’1”—a tiny powerhouse. Her energy and smarts, especially when she was telling me stories about her amazing life and career, made me feel like I was part of something special. She encouraged me to try things I wouldn’t necessarily have wanted to do on my own and helped me to find myself. Her passion was inspiring. And I’ve come to realize that what I’m able to do really is special.

Being in a creative field, opera singers are by nature emotional beings and very in touch with what we’re thinking and feeling—in much the same way that a child is. Children have this wonderful innocence and generosity; they’re not afraid to share with you everything that’s going on. Singers have so much of that in what we do, too, and I love that kind of interaction with the kids I babysit for. I also love playing games with them. Inevitably, I’ll be shocked by something they’ve thought up, and frustrated and challenged. It opens your imagination to be able to relate to kids on that level and not have that fear of judgment. I’m not afraid to get on the floor and roll around.

You have to be physically fit to have the stamina to make it through an opera. Your vocal chords are two little muscle membranes that sit in your throat, and they require exercise and strengthening and just as much practice as running football sprints does. To sing those amazingly long phrases over an orchestra, opera singers have the same lung capacity as some Olympic swimmers. But it’s really fun to open your mouth and have this enormous sound come out. You get to wear these beautiful clothes, and put on wigs, and have people do your makeup, and take on these characters that sometimes are wildly different from who you are. Yes, it’s a profession but we also get to play for a living.”

From Portland to San Francisco: Meet Katherine, A Part-Time Babysitter and Nanny 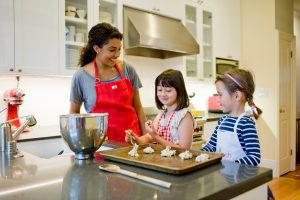 Ideas for Babysitter Activities with a School-Aged Child

How much should I charge for babysitting or nannying?

10 Babysitting Tips to Make You the Best Sitter Ever