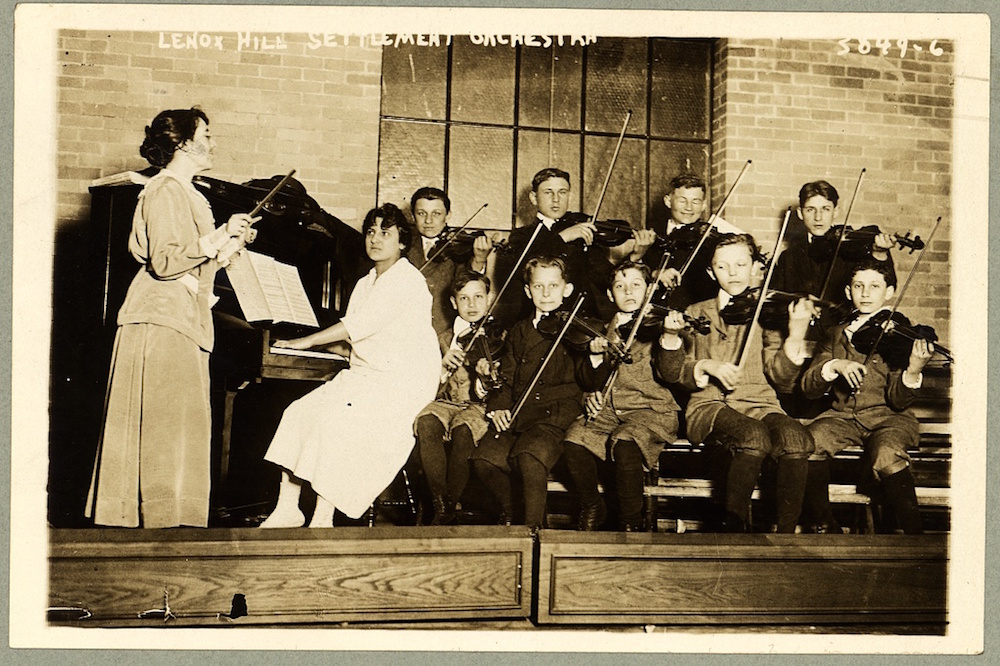 It’s a late evening in early December and I’m sitting with my tween daughter in a stiflingly heated, baldly lit, packed-to-the gills auditorium near Coney Island, waiting for Mark Twain middle school’s winter concert to begin.  We’ve come out to see a friend of my daughter’s sing with her 7th grade choral class. It promises to be a long night, with three grades’ worth of choral performances, three of band, three of orchestra, and a few extras thrown in for good measure. But I’m used to these sorts of engagements. As the parent of a kid who’s been lucky enough to attend public schools that vigorously buck the current trend of defunding arts programs, I’ve been sitting in on biannual music, dance, drama, photography, and broader “talent” shows since my daughter was in Pre-K. I hardly give the enterprise any thought.

Arts education has been a big educational talking point for years, but possibly never more than since the advent of the test-driven Common Core curriculum. As across the country the arts have been cast aside in favor of reading comprehension and STEM subjects—as well as the high-stakes exams that supposedly determine a child’s competency in them—the findings of multiple studies have been invoked to champion the ability of painting, drumming, ballroom dancing, playwriting, to enhance creativity, fine motor skills, and language development in our kids—with even more significant and lasting boons for low-income children.  Many parents with kids who are painting, drumming, dancing, and playwriting through school, both where I live in Brooklyn and elsewhere, accept these benefits as a given. But they’re not what are on my mind as the lights in the auditorium dim and the first orchestral group streams onto the Mark Twain stage.

The students are wearing the customary on-stage uniform of white shirts and black bottoms. They march purposefully out from the wings in a steady and orderly manner, delicately carrying their instruments. They quietly find their seats, set their music on their stands, and follow along with their section leaders in tuning their instruments. When Jamie Baumgardt, Mark Twain’s strings teacher, appears on stage they stand, then await her cue to sit again. As anyone who’s ever watched an orchestra knows, this is business as usual. But if you’ve ever spent any time with a large group of rabid tweens and teens, you know how exceptional this sort of behavior is.

And if you’re an educator, you know it even more acutely. I’ve listened to my sister-in-law, a 20-year veteran of elementary school classrooms, bemoan the mounting inability of her students to sit still and focus. She chalks it up to the use of smartphones and tablets, devices that encourage them to eschew human interaction and reward them for making fast, unconsidered decisions. For years, my husband taught literature to community college students and every night came home with frustrated stories of kids who didn’t know how to behave in his classroom: truly didn’t know they shouldn’t text and take phone calls, didn’t know they shouldn’t gobble sandwiches and bags of candy, didn’t know they shouldn’t listen to music through one headphone as he led them (or attempted to lead them) in discussions of Kafka and Chinua Achebe. Children are losing their understanding of basic courtesy and in the process, are becoming ever more removed from their peers and larger society. With this loss, life becomes less pleasant and more challenging for all of us. Because the loss is palpable everywhere we go. Think of the people texting through movies. Refusing to let you pass as you haul heavy grocery bags down the sidewalk. Shoving you aside to get onto the subway car first.

And this is what I’m thinking about as the strings students finish their performance, again await Ms. Baumgardt’s cue to rise, and quickly, silently take their bows and leave the stage. An orchestra has many governing rules. To survive and thrive in this setting, an orchestra member not only has to know them, she has to tacitly agree to follow them. As these rules govern how members of an orchestra treat their leaders, their equals, and the audience that has come out to see them—in addition to expectations for their own personal responsibility to practice—an orchestra, quite simply, offers a blueprint for how to behave in a society.

“My music students learn professionalism and that, regardless of the context of the setting, there are times and places to be professional,” Ms. Baumgardt tells me. “Running around in the park you can be kids and throw Frisbees. But in a professional setting there are expectations. What values should musicians have that translate to the rest of their lives?” Plenty. Do we want our children to be able to make eye contact with friends and strangers as they politely converse with them? Do we want them to be able to show empathy for others, both locally and globally? Do we want them to understand the positive influence of their hard work, not only on their own development, but on the achievements of an affiliated group? Thanks to the efforts of Ms. Baumgardt and other teachers of music, dance, drama, and plastic arts such as sculpture and drawing, they’re getting an excellent footing. “I show them that being committed leads to success, and that can make you feel great about yourself,” says Ms. Baumgardt. “But it’s also about the bigger picture. The efforts they contribute, in the long run, are going to make everyone successful.”

In some cases, that even includes their own parents. As my daughter’s friend takes the stage with her fellow singers, a dad sitting in front of me becomes animated. After snapping photos with his stage-obscuring iPad, he begins to wave his arms over his head, trying to get his kid’s attention. She ignores him. He tries again. And again. She finally acknowledges him with the meager-est of nods. By behaving professionally, as she’s been taught, she’s given her own father a subtle clue about how to behave with professionalism and courtesy. Hopefully, that tiny trend will radiate.

The very fact that my daughter and I are here tonight is proof that the lesson transcends beyond the classroom and the stage for kids, too. My daughter has come out to show support for a friend, just as this friend came out to support her a week earlier, when my daughter danced in a performance of The Nutcracker. The older they get, and the more serious about their various artistic pursuits, the more supportive they become for each other. Empathy (in the plastic arts, critiques would be miserable without empathy) is built right into the framework.

And empathy—along with discipline, listening skills, manners, the ability to articulate and to work as a team—will serve these kids whether or not they eventually choose careers in any arts-driven field. Sarah, a violinist in Ms. Baumgardt’s 8th grade ensemble, wants to be a doctor—and feels the emotional connection she’s developed to music will help her have an emotional connection to her future patients. Tricia, an 8th grade violist, thinks teamwork and intuition are the two lessons she’s learned from music that will be most valuable to her possible future career as a children’s dentist. Ultimately, the goal of arts education is not to churn out professional artists. As Mark Twain’s principal, Karen Ditolla, puts it so succinctly, “By helping children learn these crafts, we’re helping them grow as people.” There isn’t any goal finer.

5 Ways to Teach Kids the Value of Volunteering

News You Can Use: Are Music Lessons Good for Kids' Brains?